Although I’ve had many exciting experiences this year, I knew as I woke up on May 3rd that I was in for the most incredible day of my life. It all began with a breakfast with my fellow State Teachers of the Year (STOYs). During the breakfast, the National Teacher of the Year program coordinators talked about future opportunities for the STOYs including attending Space Camp and five teachers being selected to visit schools in Finland.

At the breakfast, all of the STOYs were wearing “Teach Like Me” t-shirts in support of a campaign to recruit new teachers and elevate the teaching profession. This campaign was started by Shawn Sheehan, the Oklahoma Teacher of the Year and finalist for the National Teacher of the Year. Please visit http://www.teachlikeme.org/ to learn more about Shawn’s inspiring campaign. After breakfast, our enthusiastic group gathered to take pictures.

Later, we met again in the lobby of the hotel. This time we were dressed in our most professional attire. The coordinators asked us to form a line in alphabetical order by state, and our guests formed an adjacent line. You could feel the excitement in the air as we took pictures and double checked that we had our IDs. Then, we were directed to board our buses. The STOYs went on one bus while our guests boarded another. Although our hotel was only a couple of blocks to the White House, it felt like it took forever for us to arrive. On the way, we were told to be ready for a big surprise. As this is President Obama’s last time to honor the State Teachers of the Year, he had wanted to make it a day like no other. Finally, we were told to exit the bus.

We were guided to the gates on the east side of the White House and proceeded to go through security checks with the Secret Service. We then entered the East Wing of the White House and were directed to wait in a room for the other STOYs to join us. Once everyone was inside, we were conducted to the East Room. While traveling from the Ground Floor, I tried to take in every detail from the china to the crown molding. In the East Room, the STOYs practiced getting on the risers. Once in our spot, the coordinators asked us to instead get in order by height so that all would be visible. We quickly got ourselves into a new line and then practiced getting on the risers again. Before getting off, we were given a number and were instructed to remember that number for lining up again later. It will forever be in my memory that I was number thirty-three.

After our practice, we were joined with our guests at a reception where the food looked almost too pretty to eat. Jazz music performed by Marines filled the Entrance Hall. The State Dining Room, Cross Hall, Green Room, Yellow Oval Room, and Red Room were also open to the guests. I was in awe as I explored and took in every detail of the rooms.

A little while later, the guests were directed into the East Room where they were entertained by Nate Ruess, the lead singer for Fun. Luckily, a TV had been set up in the dining room so that the STOYs could also enjoy the music while we waited. There was much laughter, dancing, and singing during this time. Although I felt impatient, I also knew that this was a moment to savor and enjoy.

Then, the moment that we had all been waiting for finally arrived. The State Dining Room door opened and each STOY was ushered into the Green Room. While waiting in the Green Room, I heard the State Teachers of the Year introduced and a loud cheer from the East Room. Then, a military escort met me at the door of the Yellow Oval Room. He announced my name and I looked into the eyes of the President of the United States. We shook hands and turned to face the photographer. Afterwards, President Obama asked me what I taught and told me to “Keep up the good work”. My military escort then led me to the Red Room. I have to admit that my passage through the Red Room was a blur. All I could think was, “I just shook hands with the President!”

I then entered the East Room to join my fellow STOYs waiting on the risers. Once in place, I was surprised when I heard them yell out “Louisiana”. The STOYs had taken it upon themselves to introduce each person as they entered. As President Obama joined us on the stage, I had to work hard to keep from singing the words, “Hail to the Chief”. The only word to describe the next hour is “surreal”. There was laughter, tears, and cheers as both the National Teacher of the Year, Jahanna Hayes, and President Obama spoke. You can view the entire ceremony at https://m.youtube.com/watch?feature=player_embedded&v=Vn6SW94c1v8. For me, the most moving part was when President Obama talked about what his response would be if one of his daughters expressed the desire to become a teacher.

After the ceremony, the guests again returned to the reception. The mood was more celebratory as we shared our stories about meeting the President. I honestly don’t know how much time passed before the party was over as I was so absorbed with the experience. All I know was that I felt like I was flying, as we exited the White House. While walking back to the hotel, my heart was happy while my head was full of questions. How can we make all teachers feel this valued and appreciated? How can we change the perception of education and all educators in this country? These are questions are not new. I’ve been asked them and I’ve asked others to answer them throughout the year. Stay tuned for my next blog to see what others adventures occurred and what I have concluded about these questions! 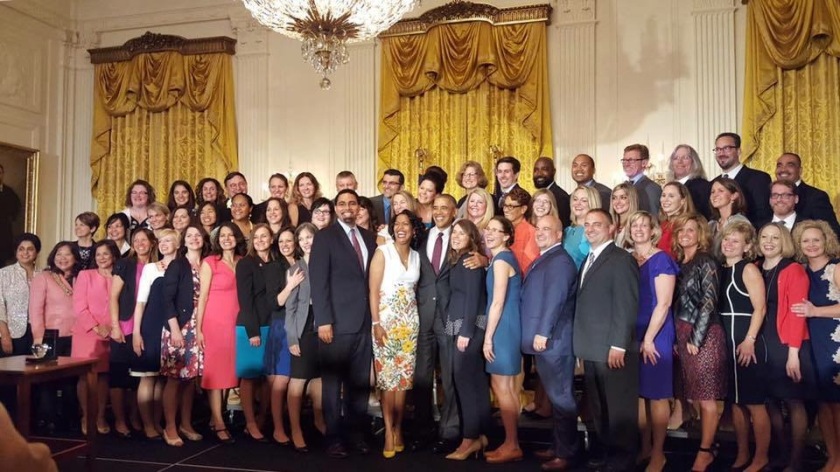