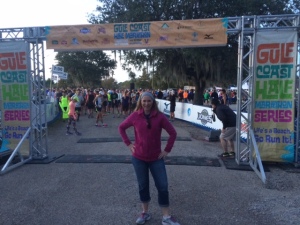 I could already feel the excitement in the air as I pulled into Fontainebleau State Park at 6:00 a.m. on October 18, 2015. Over seven hundred runners from twenty-two different states were arriving to race in the Gulf Coast Half Marathon. While everyone began to converge at the start line, I could hear the excited conversations of the runners. Some were running a half marathon (13.1 miles) for the first time, while others were veteran runners. All were there for one reason, to see if they could achieve a personal best.

Four years ago, I discovered a passion for running, and I have now competed in many races including four half marathons. However, I was not there to run on Sunday. Instead, I had a much different role for this race. Thanks to Varsity Sports, I was to be the official race starter. As I stood on the platform waiting to give the cue, I could not have been more thrilled. The race coordinator introduced me to the crowd and I was surprised to hear the loud cheers. Then, I was given the signal, and I pressed the horn to start the race. While watching the hundreds of runners pass before me, I stood cheering loudly. It was incredibly inspiring to see so many people focused on testing their limits to see if they can “Go the Distance”. As Michael Bolton’s song says, the runners know “that every mile, will be worth (their while).”

Along with the inspiring sight of the runners, I was also incredibly proud of our community. From passing out water to inspirational signs, the people of St. Tammany did an amazing job of welcoming the runners and making it a race to remember.